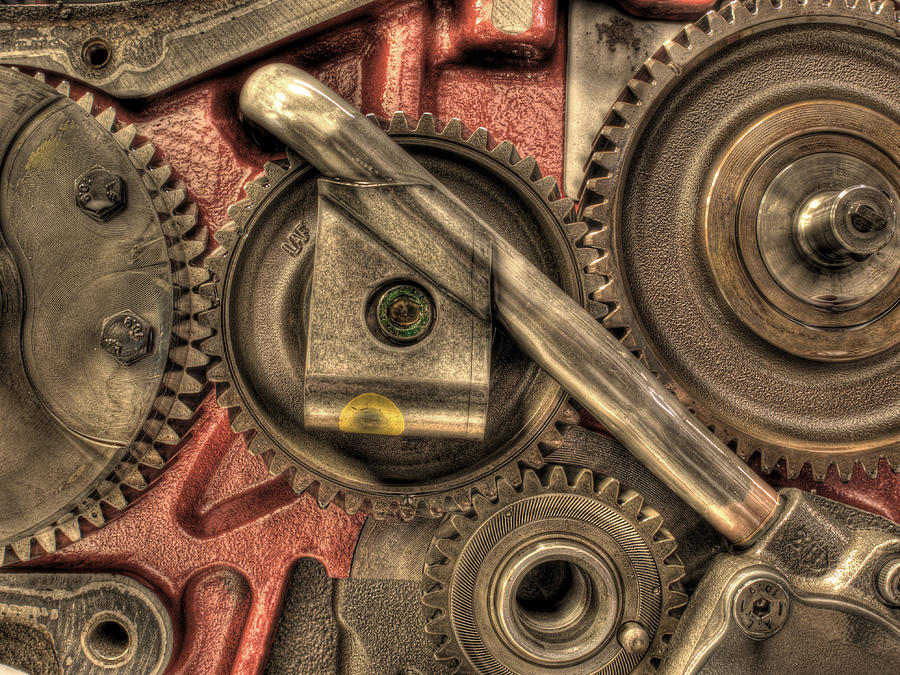 The Heart of the Beast

This original photograph is currently for sale.   At the present time, originals are not offered for sale through the William Fields - Website secure checkout system.   Please contact the artist directly to inquire about purchasing this original.

The Heart of the Beast

"As machines become more and more efficient and perfect, so it will become clear that imperfection is the greatness of man."
Ernst Fischer

Although machinery works so well and seems to lie in the realm of perfection, the reality can be something altogether different.

A few years ago, Ford Motor Company produced a model called the Escort. For whatever reason, the auto was introduced with two versions of the same automatic transmission. The decision to use one or the other was somewhat arbitrary and primarily relied on availability. One transmission was produced by Ford in Batavia, Ohio. The other came from Japan and was built by Mazda. Both transmissions were built to identical specifications.

Soon after introduction of the Escort, word got out in the consumer base that the Japanese transmission was superior. Car buyers began crawling under Escorts to see which transmission the vehicle was built with.

The situation created great consternation in Ford’s engineering and executive groups. For all intents, the transmissions were expected to be identical. What on earth could have happened to create the situation?

Ford disassembled two transmissions. One was built in Batavia and the other was built in Japan. Each and every part was measured and the measurements were recorded.

Engineers describe parts with drawings. The drawings have ideal dimensions for each measurement and an allowable tolerance range. For example a typical dimension on a part might be required to be a half inch. This is expressed as a decimal number .500. If the tolerance was .005 (about the thickness of a human hair) the dimension would be allowed to be as large as .505 and as small as .495 and still be considered usable. Keep in mind that is two human hair thicknesses of variation allowed. It isn’t very much.

The dimensions on the parts made in Japan were all very close to this ideal or nominal value. And that was the only difference between the transmissions.

By carefully monitoring their manufacturing processes, the Japanese supplier maintained a condition very close to the engineering ideal for each and every part. In doing so, they built transmissions that performed exactly as the engineers intended.

The moral of the story, if there is one, is that what we believe to be perfection is very illusive. Machinery that we expect to be perfect often is not. The amount of imperfection can seem miniscule and yet make such a vast difference. True perfection doesn’t exist. There is only the illusion of perfection.

All attempts to mimic the so called perfection of technology in our beings are flawed at best and in truth vain and inglorious.

And finally, the differences we find in each other; the imperfections that we all have are our greatest treasures. It is our mark of humanity to be less than perfect. It is the greatest beauty we can know.

I really enjoy this one!

A truly intriguing image - so much incredible detail in this composition - form,color and texture all work together to bring the viewers eye 360 possibly several times! Love the touch of green - is it corrosion? fav/v/g+

Thanks Ellen! The green is the color of the bolt head, not corrosion. Thanks again for your kind comments and support.

Love the theme and your rendering of this image. f/v Seen it in USA Artist News Daily!

Gary, thanks very much and for your valuable suggestions: )

I love this. the shapes, colors, and of course, the wonderful photography! v/f

Thanks very much Betty! Appreciate the kind words and the support!!

Very cool - love the detail in the machinery. v

Appreciate it Marcia. Thanks for your comment and vote.

William This has so many gears I wonder what its from ,sets my mind a thinking .V

Thanks Sharon. It's the interior of a diesel engine for a tractor.

This makes a very cool abstract, Bill, and detailed and tones enhance that. f/v.

Thank you Sandi, appreciate it.

I love the crispness of this image. v/f

Thanks. The last time you were here, you said it was fabulous Kim. Is this an upgrade or a demotion?

Wicked thank you. Not sure if I can get away with that. Thanks anyway!

William, I agree that the longer you stare at it, the more motion you begin to see. It might be a still-life study,but its heart is definitely beating soundly. Great detail captured & processed perfectly. voted

Thanks very much Cheri. You have my heart beating with joy!

William, What an absolutely gorgeous image of an inanimate object! Or is it? When I stare at it long enough I can see the gears meshing together and then my eyes dart to see if it has caused a chain reaction. The colours, composition and texture make for a beautiful work of art! I love the way you find beauty in that which is often overlooked! v/f/g+1.

Barbara thanks! You are so kind. I was wondering if you'd like to be my rep? : )

William, great photo love the clarity and details within this photo. Remarkable how you have managed to allow the viewer to see every piston, gear and rotars within this photo. The colors are crisp and fit so well together. So this photo in the USA Artist News promotional thread. Excellent photo, voted, Tweet, Google, and FB promoted

Thanks John, you gave it the full Monty. Appreciate it.

Thanks very much Gun!

Glad you found it interesting. Thanks for the vote

Beautiful work William...and it's so true, that quote!!! Reminds me of that old Outer Limits show when everyone on earth had made themselves look "perfect" via plastic surgery, etc. Only a few chose not to go that route and in the end, those that used to be considered ugly became the new "beautiful"...because they were now unique! v/f

Thanks very much Rory, I'm not familiar with the episode you mentioned, but I know I would have loved it. I really do embrace that which is less than perfect in life.