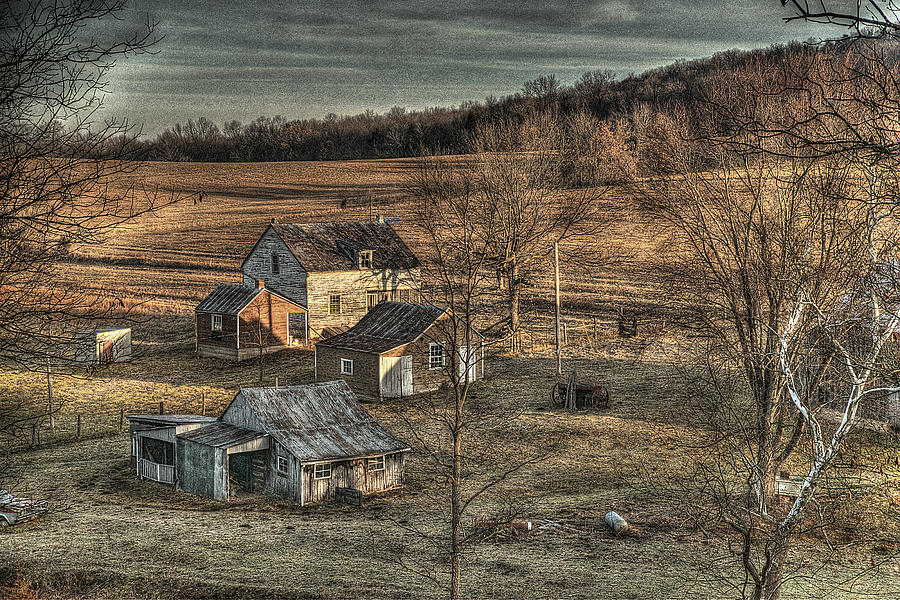 The Farmer in the Dell

This original photograph is currently for sale.   At the present time, originals are not offered for sale through the William Fields - Website secure checkout system.   Please contact the artist directly to inquire about purchasing this original.

The Farmer in the Dell

The farmer in the dell
The farmer in the dell
Heigh-ho, the derry-o
The farmer in the dell
And there are several other verses with subsequent taking by a host of farm denizens including a mouse.
The rhyme is first recorded in Germany in 1826, as "Es fuhr ein Bau'r ins Holz," and was more clearly a courtship game with a farmer choosing a wife, then in turn the selecting of a child, maid, and serving man, who leaves the maid after kissing. This was probably taken to North America by German immigrants, where it next surfaced in New York in 1883 much in its modern form and using a melody similar to "A Hunting We Will Go". From here it seems to have been adopted throughout the United States, Canada (noted from 1893), the Netherlands (1894) and Great Britain; it is first found in Scotland in 1898 and England from 1909. In the early twentieth century it was evident as wide as France ("Le fermier dans son pré"), Sweden ("En bonde i vĺr by"), Australia, and South Africa. Since then it has spread internationally. There is even a Thai version to the same tune but with a slightly different story. The three verses roughly translate to "Why does the frog have a stomach ache? Why does the frog have a stomach ache? Because he has been eating wet rice. Why is the rice wet? Why is the rice wet? Because it has been raining. Why has it been raining? Why has it been raining? Because the frog has been croaking.” I rather like that. I’ll never think of this song in the same way again.

Please feel free to share the picture on this page and any of my other photos with friends, family and associates.

Congrats on your sale! Awesome!

Beautiful! Congrats on your sale!

Many thanks to the collector from Ava, Missouri who purchased this picture!

Thanks Marcia! This one could be in your neck of the woods, I think.

A time in the past, love the old buildings....v/fav/f

Thanks Janis for your support

Lovely scene - love your work with it and love your description as well. v

Ah Marcia, so much love. Thank you for that.

Thank you visitor and welcome

Thanks Pete, appreciate it.

But why does "the cheese stand alone"? Great story. great image. v/f!!!!

One of the unresolved mysteries of life Cheryl. Thanks for you support!

Hi William, haven't done any since college, but printmaking was my favorite discipline, which is perhaps why I enjoy photography today and the effects that we can now edit into photos. Your image here has the delicate lines that give it the appearance of an etching to which a soft watercolor wash has been added. Voted before/Fav today.

We always find something in common. Thanks again Cheri!

Amazing, love the processing on this image!!

Thanks on all counts Sandi

Kate, thanks very much! It's a spot that can be seen down in a little valley below the road. There's quite a lot of trees and finding a spot where it could be composed was tricky and required finding a safe off the road place to park and hiking up and down the highway. I shot several that I thought would be "the one" but this one stood out.

Wonderful rural scene William and fantastic processing! I too enjoyed your sidebar, but now I can't get the tune out of my head! v

Thanks Barbara! Can you imagine my trying to get to sleep after doing the background research for this one? I was singing the song to the sheep that I was trying to count; )

wonderful! love the muted colors for this scene... v

Thanks A&M, the earthy umbers, siennas and tarnished gold are the colors of winter here in Missouri. We get the occasional blanket of white stuff but mainly this is how it looks.

Tweeted to 24,000 Followers of @GrandCanyonPics and @Nadine1939 We only increase the number, when we get another thousand... 8=) Reminds me of the Farm that I worked on during Haying Season. They had over 5000 Chickens in the barn we had to feed. Like your style William.. Looks Like this belongs in USA Artists News, for a Feature and Publishing also... ;=)

Thanks Bob, although my family didn't really farm in my generation (my wife's family does), I did some farm work along the way for others caring for animals and bucking hay. That was the first and last time I tried chewing tobacco. We weren't allowed to smoke, so many of the guys chewed. It just wasn't for me; )

Thanks Bob. Had you ever considered why the frog has a stomach ache?