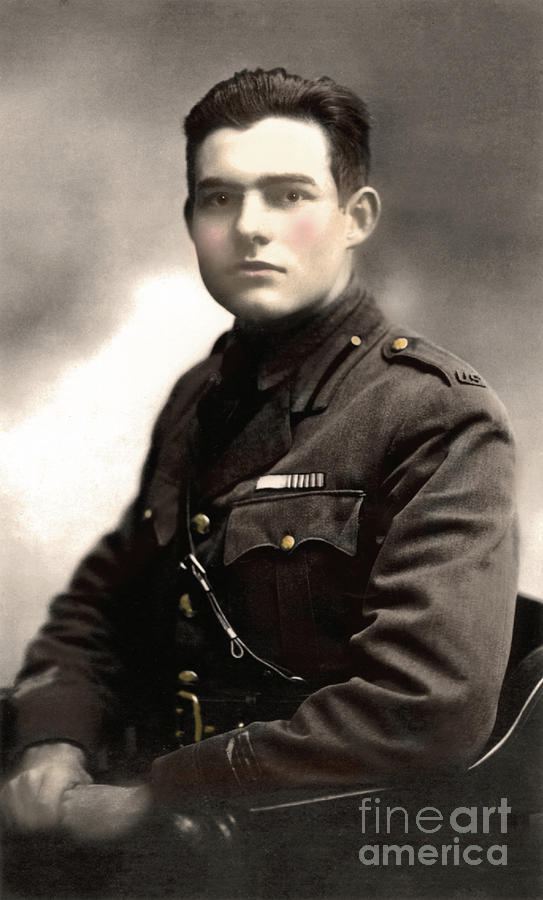 This is an image from Ernest Hemingway's service in the Red Cross in Italy during World War One. The photo was taken by an unknown studio photographer in Milan after Hemingway's injuries from mortar fire, for which he won the Medaglia d'Argento al Valore Militare, the Italian Silver Medal of Military Valor. I have hand colored this photo in the style of pictures of men who served in the military from my family. There are two inconsistencies in the picture that I am unable to explain. Hemingway's epaulets bear the U.S. insignia, yet he served with the Italians. The ribbons on his breast are not consistent with the known award he received. The Medaglia d'Argento al Valore Militare ribbon is purple with a star. and has no stripes.

I deeply and humbly appreciate all the kind words and support I receive about my work. The greatest compliment you can pay me is to share my work with others. Please share it on Facebook, on Twitter and other social media. Or, just send the url to a friend or family member who might enjoy seeing it in an email. Spread the word to any and all that you think will find what I do interesting and appealing.

Please contact me by email to order my recently published Acclaim Press book, Hermann, Missouri, One of the Prettiest Towns in America.

Watch my postings for announcements on two other photo books that are in the works including one that will contain Infrared images of the Southwestern U.S. Due in September 2016, The Four Directions – A Southwestern Journey is a collection of Infrared and other monochromes from the National Parks, Tribal Lands and the great American roadways.

The Fine Art America Watermark will not appear on any products purchased.