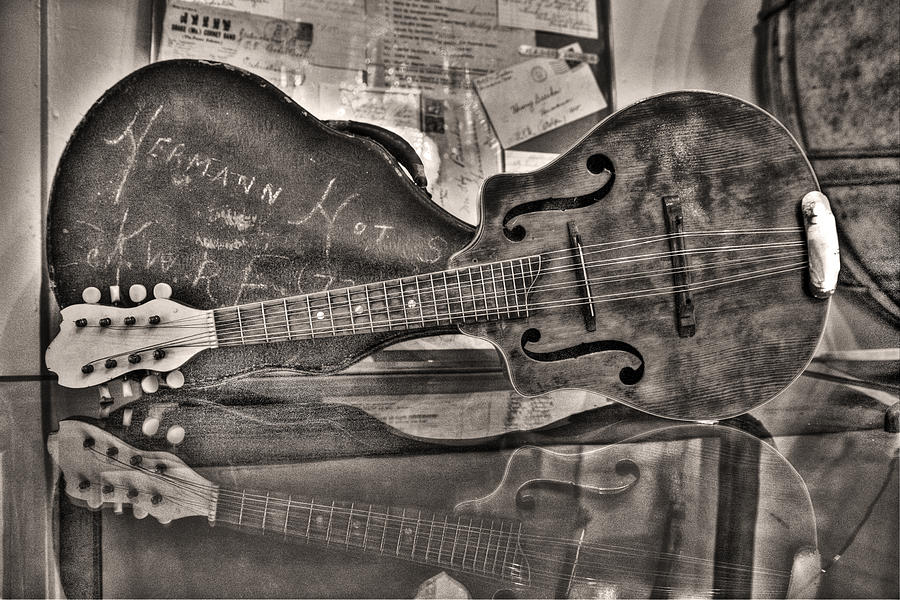 This original digital art is currently for sale.   At the present time, originals are not offered for sale through the William Fields - Website secure checkout system.   Please contact the artist directly to inquire about purchasing this original.

My Aunt Pearl played the mandolin in a hillybilly band in the town of High Coal, West Virginia. She bought that mandolin from a guy who came over from Missouri for ten dollars and a blackberry pie. She was known around High Coal for her pies. They would always bring top dollar at the church auction. Those coal miners loved her pies almost as much as I did.

On Saturday night, she and four other musicians, a guitar picker, a fiddler, a gal that sang and played the harmonica and a guy who plucked the bull fiddle to carry the bottom would get things jumping at a local roadhouse.

Aunt Pearl could sing too, but she wasn't the star. She would sing harmony and take the occasional lead on Wildwood Flower and later after Patsy Cline was on the Arthur Godfrey show, she'd take the lead on Walking After Midnight. She had a voice that was as clear as a church bell on Sunday morning and she could make that mandolin talk.

Sharpie's sold beer and had pool tables and if they knew you, you could get a mason jar of moonshine from a fella in the backroom for a dollar and a half. On Saturday night, if you got there early enough, you could get a slice of Aunt Pearl's blackberry pie.

One night a fight broke out in the middle of old Hank's Jambalaya. For a half a second the band stopped and tried to protect their instruments until Aunt Pearl yelled "Keep playing!" They played on while those coal miners busted chairs over each other's heads and one guy got cut up with a broken beer bottle.

The sheriff was already there. He instantly deputized a couple of the more sober looking customers and before too long they had things under control.

Aunt Pearl gave Sharpie an earful and because of her willingness to speak up the tavern got its first bouncer before the next weekend. It was a shame the band had to lose their bass player, but he was the biggest guy in town. And, as part of the deal, Sharpie got a free pie on his birthday.

Please feel free to share the picture on this page and any of my other photos with friends, family and associates.

Cary, thanks very much

Oh this is wonderful and nostalgic !! great info on sideline as well!

Peggy, thanks very much!

I feel transported inside a Truman Capote's novel! so beautiful and nostalgic, voted and faved

Marie-Line, thank you so much for the very high praise. I'm overwhelmed

Thanks so much Ann. Your support means a lot.

V&F Really like the photo. Your "Imaginary" story is great and didn't realize it was made up until reading an earlier comment. Well played William well played.

Jim, thanks so much. Every picture tells a story and every story deserves a picture.

You're very kind, thanks!

Thanks Charlie, great to hear from you and great to see your kind comments

Thanks so much Bedros

Wish I'd heard Aunt Pearl! Love the mandolin, and you've given it a proud presentation! Well done!

Norma, appreciate your support. Thanks very much!

Beautiful picture and I love the background in the description! v

I love the sound of a Mandolin. Your piece and the choice of B & W is simply wonderful! V

You're very kind Annie, thank you!